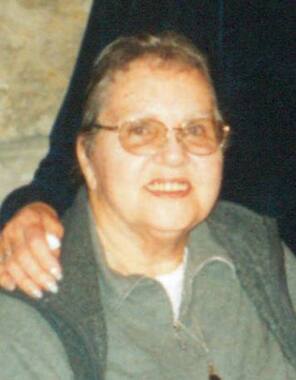 Back to Beverly's story

Beverly Hanson, 85, of Ottumwa and formerly of Eddyville passed away Tuesday, December 31, 2019, at Ridgewood Specialty Care in Ottumwa.
Beverly Rae Hanson, daughter of Raymond Maxwell and Verda S. (Shaw) Robinson, was born March 5, 1934, in Oskaloosa, Iowa. Her family moved from Oskaloosa to Fremont when she was 11 years old. Beverly was a 1952 graduate of Fremont High School. In 1954, she married Harold Lorene Hanson; they made their home in Eddyville. In the early years of their marriage, Beverly did laundry for people to supplement their income. Later she worked as a nurse's aide at Mahaska County Hospital and Oskaloosa nursing homes. She then took a job in radiology at the Ottumwa Medical Center, serving as a nurse's aide and transportation aid for many years. Beverly enjoyed her home and homemaking; she loved to read and do jigsaw puzzles. She attended the First Assembly of God in Oskaloosa and enjoyed the fellowship of the OK Bunch.
Beverly's family includes her husband, Harold of Ottumwa; her son, Harold L. Hanson, Jr. (Charlene Meyers) of Eddyville; a grandson, Eric Meyers of Missouri Valley, Iowa; and several nieces and nephews.
In addition to her parents, Beverly was preceded in death by two infants sons; three sisters: Phyllis Veach, Barbara Davis, and Mary Elliott; and a brother, Raymond Robinson.
Graveside memorial services will be held at 1 p.m., Friday, January 3, 2020, at Columbia Cemetery near Chillicothe with Rev. Dan Visser of the Faith Community Church in Eddyville officiating. Langkamp Funeral Chapel & Crematory in Oskaloosa is handling the arrangements. Memorial contributions can be made in her name.
Published on January 1, 2020
To plant a tree in memory of Beverly Hanson, please visit Tribute Store.

Plant a tree in memory
of Beverly

A place to share condolences and memories.
The guestbook expires on March 31, 2020.