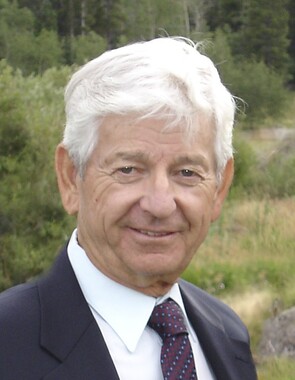 Back to Clay's story

Clay Carriker, 94, of Cape Coral, Florida and formerly of Oskaloosa, passed away Wednesday, April 24, 2019, at Hope Hospice in Cape Coral.
Clayborn, son of Homer and Effie (Long) Carriker, was born on June 26, 1924, at his home in Rose Hill, Iowa. He was a 1942 graduate of Oskaloosa High School and entered the military with 16 of his classmates on October 13 of that same year.
Clay was in the Army-Air Force and flew 17 combat sorties over German-occupied Europe in a B-24 Liberator, bombing primarily in Germany. Upon his discharge, in October 1945, he was awarded the European-African-Middle Eastern Ribbon with five Bronze Stars and the Air Medal with one Oak Leaf Cluster.
He married Helen Veerman in 1943. To this union three children, Larry, Dennis, and Vonnie were born. They later divorced, and in 1968, he married Jean (Foster) Mulford.
After his military service, Clay put together a logging crew and cut trees in the forests of Washington State. A few years later, he returned to Oskaloosa and opened a filling station in New Sharon, where he sold fuel, service, and used cars. Shortly thereafter, he became the sales/service manager for the Oskaloosa Studebaker dealership owned by Lee and Earl Green. The Greens later purchased the Ford dealership from the Lamberson family. Clay became their sales manager, and eventually, Clay purchased Green's Ford and built his own new dealership on South 17th Street.
He was born to sell. He was one of those people who could sell ice cubes to Eskimos! He loved antique cars and collected Model A Fords, 50's era Thunderbirds, Studebakers, 40's era Ford coupes, and early Mustangs.
Music and square dancing were his other passions. Clay taught square dancing and called dances to thousands of people throughout the state of Iowa. He also organized and was one of the callers at a National Square Dance Festival that was held on the streets around the Oskaloosa city square. This event attracted nearly a thousand dancers from California to Florida!
Clay also had a great love for the game of golf and boating. Many weekends were spent enjoying them. As a teen, he worked at the Park View Golf Course - now called Edmundson. He taught many young golfers how to play and enjoy the game as he did. He won several local tournaments and was most proud of winning the Oskaloosa City Tournament. Clay also served on the Elmhurst Country Club board for many years. He used his skills from logging and driving a bulldozer to build new golf tees, redo many of the greens, and made many other modifications to the course.
Many years ago, Clay and Jean purchased a home in Cape Coral, Florida. They were able to spend several months a year playing the game they both loved. His final years were spent living on hole number five on the Palmetto Pines Country Club.
Clay is survived by his wife Jean, of almost 51 years, his children Larry of Oskaloosa, Dennis (Sue) of Cape Coral Florida, Vonnie (Carl) Jones of Greenville, Ohio, Deb (Daryl) Fisher of Cape Coral Florida, Billie (Kelly) Cornish of Bondurant, Iowa, Ron (Julie) Mulford of Taylors Falls, Minnesota; 15 grandchildren, 21 great-grandchildren, and 2 great-great-grandchildren.
In addition to his parents, Clay was preceded in death by three brothers: Lester, Afton, and Howard; three sisters: Bernice Horachs, Wilma Gillespie, and Dorthea Schippers, a step-son, David Mulford and step-grandson, Danny Joe Cornish.
Memorial services for Clay will be held at 11 a.m., Monday, June 17, 2019, at the First Christian Church with Rev. Molly Goodrich officiating. Burial will be in University Park Cemetery. The family will greet visitors from 10 a.m. to service time on Monday morning. Langkamp Funeral Chapel has been entrusted with the arrangements. In lieu of flowers or as a memorial offering, donate on behalf of Grandpa Clay Carriker to the *Danny Joe Memorial Golf Tournament. Make checks payable to DJC Golf and send them to:
DJC Golf, Attention John Cornish
2040 Cromwell Circle Davenport, IA 52807
*Danny Joe Memorial Golf Tournament sends 100% of the proceeds to help Children's Cancer Connection fund Camp Heart Connection.
Published on June 10, 2019
To plant a tree in memory of Clay Carriker, please visit Tribute Store.

Plant a tree in memory
of Clay

A place to share condolences and memories.
The guestbook expires on September 08, 2019.

Restore the guestbook to view the 1 more posts by family and friends, and share a memory or message of condolence of your own.