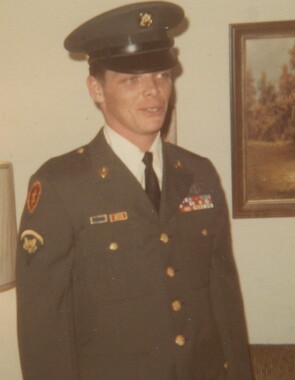 Back to Donald's story

Donald Eugene Sellars (Sniff) born March 7, 1949 passed December 3 2019 from lung and bone cancer brought on by Agent Orange contracted while serving with the 3/4 Cav, 25th Division in Vietnam. One of six children, the youngest of three boys. In his younger years he was active in and loved sports, starting little league baseball at the age of 8. Playing basketball and football in fifth and sixth grades at Whittier in Oskaloosa. He was a '67 graduate of Oskaloosa. He still loved sports even though he moved to Longmont, CO rooting for the Iowa Hawkeyes and watching the Big 10 and of course the Denver Broncos and New York Yankees. He worked over 40 years in a cement quarry, first for Martin-Marietta then Cemex as a heavy equipment operator. In 1972 he married Julie Levernier. They later divorced. They have two daughters; Michelle (Chris) Sannino Doylestown, PA and Reagon (Jimmy) Shaw Monroe, NC. His surviving siblings are Kent (Luisa) Sellars Los Lunas, NM; Diana (Bruce) Mattix Rocklin, CA and Roxann (Mike) Goings Mtn View, CA. He has two grandsons and three granddaughters and many, many nieces and nephews. He is preceded in death by his parents, an older brother Kenneth Sellars and an older sister Linda Sellars. As was his wish, his body will be cremated and his ashes will be scattered. A memorial is planned for later in the spring in Oskaloosa.
Published on December 4, 2019
To plant a tree in memory of Donald Sellars, please visit Tribute Store.

Plant a tree in memory
of Donald

A place to share condolences and memories.
The guestbook expires on March 03, 2020.

I know i never had the chance to meet him but Family is Family And I know he is being protected by God. 💐 ♥💐

Tim Hol ( cousin )
Me & my family r so sorry for ur los
Kenny & Paulette Groet
Diane, sorry to hear of your loss. Condolences to the family.
Katie Burnham. 12-6-19
I hadn't seen Donnie in years until our 50th class reunion in 2017, it was good to catch up. He will be missed by his friends ,classmates and mostly his family. RIP Donnie.
Patrick Casey
Donnie's passing is a reminder that we should all live life to its fullest every day. I am one of Donnie's classmates of Osky '67. RIP.
Roxann Goings
I will miss my brother more than anyone knows. I have many wonderful memories of him. Donnie still had childhood friends in Osky and a special friend from his time in Vietnam. He was loved by so many people. He was always helping others. I admired him. He was there for Mom until she passed away. His favorite memory of me is that when he returned from Vietnam, I ducked under the rope and ran to him. I guess I wasn’t supposed to do that. He thought that was funny. He is my hero. It won’t be the same without him. Love you Donnie.
Tommy & Sheri
Chris, Michelle, Reagan and families,
We are praying for you during this very difficult time.
We love you ❤
Jody Zuniga
I have many special memories of Donnie and I’m happy to have spent many summers hanging out with you all. My fondest memory was helping Donnie build the pool. He told me he was so frustrated trying to get it built but I just sat there patiently and waited for him to ask for my help. I doubt I did much but it was fun being there. I’m so sorry for your loss.
Ellen Anderson (Shrago)
So sorry to hear of Dons passing. Have very fond memories of our high school years. My condolences go out to his family. RIP my friend
patty Sannino
I am sorry to hear of Donalds passing. I know how much he'll be missed. My sincerest condolences to his family.
Ted Stair
Rest in peace Donnie. Prayers for your loved ones.
View all