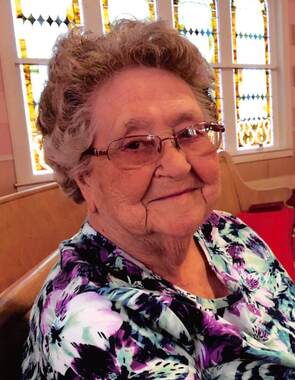 Eldonna Graham, 87, of Moulton, passed away on January 10, 2020 at Centerville Specialty Care. Eldonna was born on October 8, 1932 in Ottumwa to Fred and Margaret (Hartley) Hem.
After graduating from Ottumwa High School, Eldonna married Robert Kinkade in 1950 and to this union, four children were born. The couple later divorced. In 1964 she moved to Moulton and married Wilfred Seibert and became a devoted stepmother to his three children as well. Wilfred passed away in 1974. The best day of her life was the day she became a mother and the best job she ever had was raising seven kids, including her stepchildren. In 1980, Eldonna married Chester Graham and the couple remained married until his passing in 1994.
In her younger years, Eldonna worked several jobs including Coca-Cola Bottling, waitressing on the weekends and Harris Grocery for several years in Moulton.
Eldonna was very crafty and enjoyed crocheting, embroidery, sewing and quilting. She enjoyed tending to her garden and growing flowers. She could often be found in the kitchen baking and cooking (she was known for her homemade chicken and noodles.) Taking long car rides, feeding the birds and visiting with people were some of her favorite past times. Eldonna was an active member of the Moulton United Methodist Church and could often be found lending a hand with church dinners and events and participating in United Methodist Women.
Eldonna is survived by her children: Mike (Cathy) Kinkade, Kathy (Rodger) Brown, Jane Andrews and Jackie (Glenn) Appler; stepdaughter, Brette (John) Bird; stepson, Rex Seibert; 15 grandchildren and 24 great grandchildren. She was preceded in death by her parents; spouses: Wilfred Seibert and Chester Graham; siblings: Chuck, Bob, Bussy and Junior Hem, Florence Holden and Muggins Nutter; grandson, Brian Kirby; stepson, Carl Seibert; son-in-laws: Steve Andrews and David Fincher and stepdaughter, Jeanne Fincher.
Funeral services will be held at 11:00 a.m. on Tuesday, January 14, 2020 at the Moulton United Methodist Church with Chaplain Dan Smith officiating. Interment will immediately follow at Sunset View Cemetery. Visitation will be held one hour prior to the service from 10-11:00 a.m. Memorials may be made to the Moulton United Methodist Church, the Pulliam Park Recreational Committee or the Garrett Memorial Library. Online condolences may be shared at www.thomasfh.com or facebook.com/thomasfuneralhome.
The family wishes to extend their sincerest gratitude and appreciation to the staff at Care Initiatives for the wonderful care and compassion they provided to Eldonna.
Published on January 13, 2020
To send flowers to the family of Eldonna J. Graham, please visit Tribute Store.

Send flowers
in memory of Eldonna