Back to Ginny's story

Ginny Foster, 61, a lifelong resident of Oskaloosa, passed away peacefully on Saturday, March 21, 2020, surrounded by her family, at the Mahaska Health Hospice Serenity House.
Ginny Kay Perdue, daughter of Charles Emery Perdue and Dorothy Fern Reitzel, was born on December 16, 1958, in Oskaloosa, Iowa. Ginny graduated from Oskaloosa High School in 1977. She attended Pittsburg State University, where she ran track and graduated with a Bachelor's Degree in Education. She married the love of her life, Michael Bruce Foster, on January 12, 1979, at Central United Methodist Church in Oskaloosa.
Ginny's true vocation in life was raising her five children with Mike. The family made camping trips from coast to coast, including many to Rocky Mountain and Grand Teton National Parks. Ginny was also known to many as a devoted educator, teaching Physical Education and Health, as well as other subjects, at Oskaloosa High School for nearly 20 years. While balancing a busy parenting and teaching schedule, she earned a Master's Degree in Education from Viterbo University. She was a longstanding member of the Central United Methodist Church, as well as a member of PEO Chapter X.
In January 1998, Ginny was diagnosed with an aggressive, stage 3 breast cancer. At that time, her five children were all still at home, ranging in age from 17 to 8 years old. When told her odds of surviving five years after standard treatment, Ginny told the doctor, "That's not good enough." Ultimately, Ginny chose a more aggressive treatment at the U of I Hospital that offered a better chance at surviving the ten years until Ginny's youngest child would graduate from high school. While that treatment nearly killed her and recovery required about two years, Ginny then enjoyed almost 20 years of productive health, surviving to see her children finish college and graduate school, marry, and have 11 grandchildren.
Ginny was able to travel to all fifty states with Mike and lovingly craft a quilt for each of her children and grandchildren (the last one finished just days before her passing). She embodied one of her favorite Bible verses written on each one of her grandchildren's quilts: "Be kind to one another." (Ephesians 4:32). Ginny's last years were marked by the "late effects" of the aggressive cancer treatment, and while she had long-term damage to many systems in her body, it was ultimately damage to her lungs that caused her death.
Ginny's family includes her loving husband of 41 years, Mike Foster of Oskaloosa; her children: Rebecca and Jay Bock of Oskaloosa; Kristen and Chris Fink of North Macedonia; Michelle and Nathan Lahner of Oskaloosa; Daniel and Amanda Foster of Oskaloosa; and Timothy and Katie Foster of Canyon, TX. She was blessed with eleven grandchildren: Ezra and Leah Bock; Jackson, Gemma, and Delia Lahner; Norah, Bennett, and Hazel Foster; and Lydia, Ingrid, and Josephine Foster. She is also survived by her three brothers: Charlie Perdue and Mary-Lucille Mantz of Overland Park, KS; Tom and Freda Perdue of Ogden, IA; and Dave Perdue of Lake Ozark, MO; as well as her stepmother-in-law Theressa Foster, and many cousins, nieces, and nephews.
Ginny was preceded in death by her parents, father-in-law Jackson Foster, and mother-in-law JoAnn Snowbarger.
Due to public health restrictions, memorial events will be curtailed significantly. Visitation will be 10 am to 6:30 pm, Monday at Langkamp Funeral Chapel. Family members will not be present, and the number of people allowed into the chapel at one time will be subject to state limitations. A private burial will be held Tuesday.
Again, due to public health considerations, please no floral arrangements should be sent to the funeral chapel or the family's home. Instead, to honor Ginny, please make memorial contributions to the Central United Methodist Church or Mahaska Health Foundation for the Hospice Transitions Program at Mahaska Health Serenity House.
Published on March 23, 2020
To send flowers to the family of Ginny (Perdue) Foster, please visit Tribute Store.

Send flowers
in memory of Ginny

A place to share condolences and memories.
The guestbook expires on June 21, 2020. 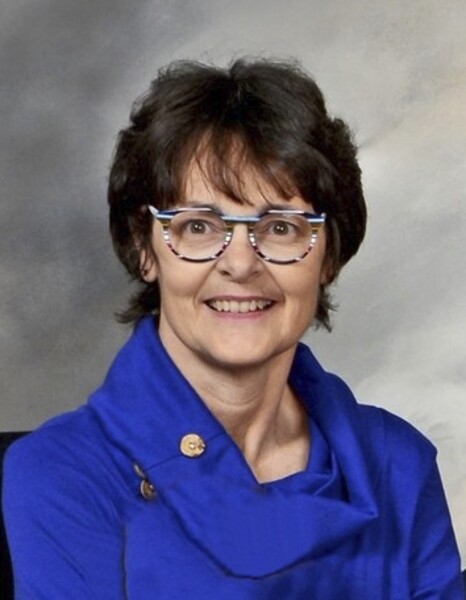