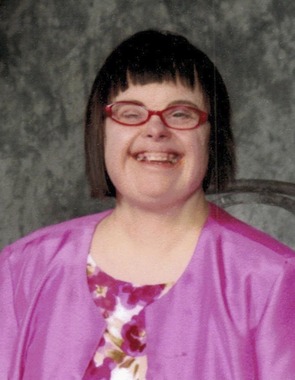 Back to Jane's story

Jane Rourke, 57, of DeWitt, Iowa, formerly of Oskaloosa died unexpectedly Sunday, October 6, 2019, at the University of Iowa Hospital. She was born October 20, 1961, to Margaret and Marcus Rourke in Oskaloosa, Iowa. Jane attended Oskaloosa Schools and learned to read phonetically though she had Down Syndrome. She worked in the sheltered workshop at Christian Opportunity Center for 30 years and took great pride and pleasure in her work. She competed enthusiastically in Special Olympics bowling, track and field, and equestrian. Her progress and accomplishments in English equitation through New Kingdom Trailriders in the Quad City area earned her a nomination to Special Olympics - World Games in 1999.
She enjoyed her first jet flight to Ohio in 1995, followed by vacations to see family in California and a week-long horseback adventure in Florida that included Disney World. In North Carolina, Jane and her sister Mary hiked up to a waterfall in Smoky Mountain National Park. After that, Jane lived in her own apartment for 13 years with minimal assistance, after learning skills in a group home. When her memory declined, Jane moved into a wonderful group home in her hometown of Oskaloosa. Requiring more care, she moved to an excellent group home in DeWitt, Iowa, near her sister Mary in Davenport. They enjoyed many simple activities together. Jane was an avid Hawkeye fan. She loved music, dancing and babies. She prayed for anyone in need and enjoyed a weekly Bible study in Oskaloosa. Her favorite things were Jesus and God. Jane was a joy to all who knew her, or even only met her. She will be greatly missed by those who cared for her, and so many others.
Jane was preceded in death by her mom who died in 2015, her dad who died in 1982, and several aunts and uncles. Remaining family include her brother, John Rourke in Cedar Rapids, sisters Mary Rourke in Davenport and Cathy (Roger) Soukup in Urbandale, Iowa as well as a nephew and nieces, a great niece and great nephews, several cousins and one aunt.
Jane's family wishes to thank the medical personnel at Genesis Hospital in DeWitt and University Hospitals and Clinics in Iowa City. They also wish to thank the staff of Imagine the Possibilities in Oskaloosa and DeWitt for so many years of good care and assistance for Jane in their group homes.
A Funeral Mass will be held Thursday, October 10, at 11:00 AM in the St. Mary's Catholic Church in Oskaloosa with Reverend John Spiegel officiating. Jane will be cremated following Mass and burial in St. Mary's Cemetery will follow at a later date. The Bates Funeral Chapel is in charge of the arrangements. Visitation will begin Thursday at 9:30 AM in the Bates Funeral Chapel, prior to the service at 11:00. Memorial gifts may be directed to: Imagine the Possibilities, Christian Opportunity Center, Special Olympics Iowa, and St. Mary Catholic Church.
Published on October 8, 2019
To plant a tree in memory of Jane Ann Rourke, please visit Tribute Store.

Plant a tree in memory
of Jane

A place to share condolences and memories.
The guestbook expires on January 06, 2020.