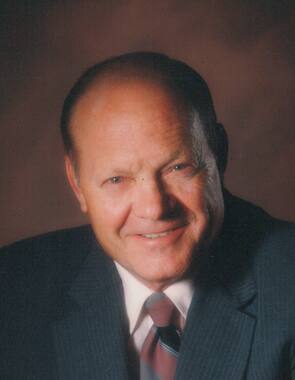 Back to Loren's story

Loren Goldsworth, 84, of Cedar passed away Monday, January 20, 2019, at Mahaska Health in Oskaloosa, Iowa.
Loren Francis Goldsworth, son of Andrew Jackson and Willa Alpharita (Bruce) Goldsworth, was born January 14, 1936, in Stockton, California. When Loren was a young boy, the family moved to Colby, Kansas. While in high school, he made a name for himself as a wrestler; wrestling at 98 - 103 pounds, he was named state champion twice and still holds wrestling records at his high school. While in high school, he also worked part-time as Colby Tire and Battery and was introduced to mechanics. He graduated from Colby High School in 1936. That same year, on September 6, Loren married his high school sweetheart, Vonna Vee Crouse, a young lady he met at the roller skating rink. They made their home in Colby, and Loren was soon hired as a mechanic with the Case IH Implement dealer. Loren excelled at mechanics, he attended training in Wisconsin through Case IH and eventually became certified in diesel mechanics. The family lived in Oakley, Kansas for a brief time before moving to Oskaloosa in 1964 to work at the Case IH Dealership. Loren's mind seemed to be wired for mechanics and he was known as the go-to guy for any problem other CIH mechanics couldn't solve. Even after moving to the sales manager position in 1975, Loren was called by his farmer friends to help fix a broken down piece of machinery during planting and harvest.
After Loren's retired in 2002, he continued his fascination with farm implements - just on a smaller scale. While in sales at Case, he started to collect toy tractors; after his retirement, he began to restore toy tractors. People from all over would ship him old broken down toys, and he restored them to like-new condition.
Loren had a passion for mechanics, but he never lost his love for sports either. When his children were young, he coached their Little League teams and eventually served as President of Little League for several years. He served as the high school booster club president for several years and encouraged all children to participate in sports, making sure they had the equipment to play. When his son and grandsons wrestled, Loren was their most enthusiastic fan. In 2010, Loren was able to attend the NCAA Wrestling Championship in Omaha; he didn't miss a match. Loren was also a member of the Lion's Club, he felt strongly about their mission and loved the comradery with other members.
His family includes his wife Vonna Goldsworth; his children: Debra (Mike) Beal of Oskaloosa and Neal Goldsworth of Council Bluffs, Iowa; his six grandchildren: Michael Beal, Veronica (Zachary) Johnson, Daniel Beal, Stephen Goldsworth, Jack Goldsworth, and Asha Goldsworth; two great-grandchildren: Lydia and Liam Johnson; a sister-in-law, Tammy Goldsworth of Colby, Kansas; and several nieces and nephews.
In addition to his parents, Loren was preceded in death by a sister, Phyllis Turrell; and two brothers: Milton Goldsworth and Morris Goldsworth.
Visitation for Loren will begin at 11 a.m., Friday, January 24 at Langkamp Funeral Chapel; the family will greet visitors from 4-5 p.m. A Service of Remembrance will be held at 5 p.m. Private family burial will be in Cedar Memorial Cemetery.
Published on January 22, 2020
To plant a tree in memory of Loren Goldsworth, please visit Tribute Store.

Plant a tree in memory
of Loren

A place to share condolences and memories.
The guestbook expires on April 21, 2020.

Diana and Chuck Maiseroulle , Donna Bradley
We are so sorry to hear of Loren’s passing. You all are in our thoughts and prayers. Love you- Diana, Chuck, and Donna
View all