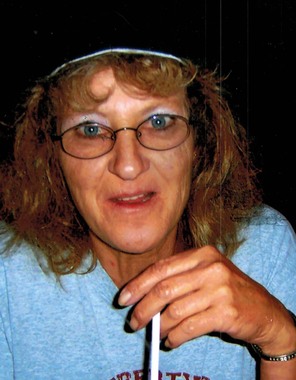 Back to Mary's story

Mary Ellen Monohon, 64, of University Park, died Friday, January 3, 2020, at her home in University Park surrounded by her family. She was born on July 8, 1955 in Salem, New Jersey, the daughter of Alfred and Mary Elizabeth (Thompson) Cantrell. Mary was raised by her stepfather Arthur "Pete" Murphy. On July 8, 2003 she was united in marriage to Fred Monohon.
Early on she worked for the D.O.T. in Mahaska and later as a C.N.A. at the Keokuk County Hospital. She later drove truck for various companies until taking a job at Ben Shinn Trucking where she worked the last 18 years. Mary was close to all those she worked with and grew to love her work family. Mary raised her 3 children on her own and she was proud of the fact that she passed on her hard work ethic and tenacity to her daughters. She enjoyed trips to the casino, supervising Fred on their ongoing house transformation and spending time with her kids, grandchildren and great granddaughter.
Her family includes her husband, Fred Mohonon of University Park; her daughters, Barbara Moffitt of Oskaloosa, Lorraine (Michael) Bakken of Oskaloosa and Laura (Clay) Beyer of New Sharon; 16 grandchildren, Jessica Steinhart, Melanie Steinhart, Alex Steinhart, Erin Steinhart, EchoMarie Puls, Ty Short, Cheyenne Thibualt, Alyssa Smothers, Andrew Beyer, Jacob Beyer, Brody Coleman, Autumn Coleman, Destiny Johnson, Cohen Johnson, Kaley Monohon and Wyatt Monohon; a great granddaughter, EverMarie Puls; her sisters, Bonnie Teffeau and Cathy Calder; her step-children, Kathleen (Andy) Coleman of Ottumwa, and Julie (Phil) Morrison of Ottumwa; She is also survived by many nieces and nephews
Mary was preceded in death by her parents; her stepfather; her grandmother, Marie Thompson; a granddaughter, Samantha Steinhart; and a sister, Margaret Ann Moore.
A memorial service will be held at 11:00 a.m. Saturday, January 11, 2020, at the Bates Funeral Chapel in Oskaloosa. As was Mary's wish her body has been cremated. Burial will be held at St. Mary's Catholic Cemetery in Oskaloosa. Mary's family will be at the Bates Funeral Chapel from 9:30 a.m. until service time at 11:00 a.m. Saturday to greet friends and family. The Bates Funeral Chapel is in charge of arrangements. Memorials may be directed to the family.
Published on January 6, 2020
To send flowers to the family of Mary Ellen Monohon, please visit Tribute Store.

Send flowers
in memory of Mary

A place to share condolences and memories.
The guestbook expires on April 05, 2020.