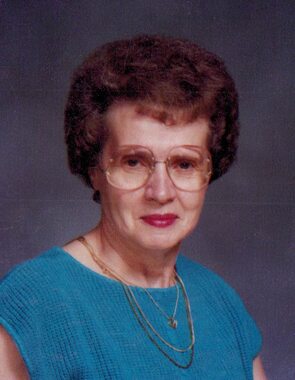 Back to Wilma's story

Wilma Van Weelden, 88, of Oskaloosa, died Saturday, January 11, 2020, at the MHP Hospice Serenity House in Oskaloosa. She was born March 9, 1931, in Peoria, Iowa, the daughter of Garrett and Emma Ryken Nieuwsma. She attended Peoria Christian Grade School through 8th grade. Though she did not finish high school immediately following 8th grade, Wilma saw great value in completing her high school education. She was able to achieve her goal of obtaining her GED in the late 1990's when she was nearly 60 years old.
Wilma's family moved to Oskaloosa shortly after she was finished with 8th grade. Early on she worked at the Big Smith Overall Factory in Oskaloosa. She started there as seamstress and worked her way up to a supervisor position before the factory closed. On January 26, 1951, Wilma was united in marriage to Marvin F. Van Wyk in Oskaloosa. To this union three children were born, LaVern, Bonita, and Wayne. Following their marriage Wilma continued to work outside the home. First at Mahaska Hospital and later at the Oskaloosa Produce (now Oskaloosa Foods) retiring from there in 2001. On December 19, 1994, Marvin died. On November 22, 2001, she was united in marriage to Raymond Van Weelden in Oskaloosa. The two of them enjoyed twelve years together before he died on April 2, 2013. Wilma made her Profession of Faith and became a member of the First Christian Reformed Church in Oskaloosa at the age of fifteen. Over the last 73 years, Wilma has been active in many church organizations. She enjoyed bowling with her family, playing the organ, playing BINGO at Northern Mahaska, and participating in the Susan Koman Breast Cancer Awareness Walk (as a survivor) every year she was able. She especially enjoyed having her family around, she always looked forward to visits from her children and grandchildren.
Her family includes her son and his wife: Wayne and Sue Van Wyk of Oskaloosa; a daughter in law: Robin Van Wyk-Haigh of Oskaloosa; three step children: Ronald Van Weelden of Wauwatosa, Wisconsin, Angela Hanson of Chandler, Arizona, and Joslyn (Daniel) Kramer of Dyer, Indiana; six grandchildren: Mark (Tami) Van Wyk, Jeremy (Eric Riesburg) Van Wyk, Amanda (Davy) Richards, Scott (Megan) Van Wyk, Jason Van Wyk, and Whitney (Stephen) Blattler; 12 great grandchildren; 11 step grandchildren; two sisters: Anna Vande Wall of Oskaloosa and Elinor Rowland of Council Bluffs.
Wilma was preceded in death by two husbands: Marvin and Raymond; a son: Vern Van Wyk; a daughter: Bonnie Bequeaith; grandson: Michael Bequeaith, two grandchildren: Emma Sue Richards and Hayden Blattler; a brother: Henry Nieuwsma; and two sisters: Gretta Van Wyk and Junella Hoksbergen.
Funeral services will be held Saturday, January 18, 2020, at 10:30 a.m. in the First Christian Reformed Church in Oskaloosa with Reverend Jonathan Spronk officiating. There will be a 10:15 family prayer service Saturday morning in the fellowship hall of the church. Burial will be in the Forest Cemetery. The Bates Funeral Chapel is in charge of the arrangements. Visitation will begin Friday, January 17, 2020, after 11 a.m. in the Bates Funeral Chapel and the family will be at the funeral chapel from 5-7 Friday evening to greet friends and relatives. Memorials may be made to MHP Hospice Serenity House.
Published on January 13, 2020
To send flowers to the family of Wilma Van Weelden, please visit Tribute Store.

Send flowers
in memory of Wilma